Page Has Been Viewed 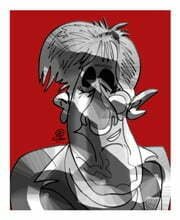 An Algerian caricaturist and artist. He lived and worked most of his life in France.

Rasheed Qaci was born in February 1942 in Mostaganem, Algeria. He is the third in a family of eight children. He spent his childhood, youth and education in El Jadida, Morocco, where he lived until 1962 before returning with his family to Algiers after independence. Rasheed’s father, Mohamed Ait Qaci was known in El Jadida through the school he ran during the protection period and after independence, known as “Squillat Qaci” and its current name, Mohamed Rafia College. He is also the nephew of the late Moroccan leader Ali Yatta, a great figure of the Moroccan left

His first profitable job came from the DHJ Football Club in El Jadida, Morocco, which in 1962 entrusted him with making posters advertising a football match.

He joined the School of Fine Arts in Algeria (specializing in contemporary textiles), before receiving a scholarship to join the Academy of Applied Arts (textile design) in Sofia, Bulgaria, from which he graduated and chose (caricature) as a way to express his desire to change the world for the better.

When he returned to practice the art of caricature in Algeria and published his first drawings in 1965 there, he created the character ” Tchipaze”, which was soon adopted by the readers of the weekly. He published his first comic strip in a newspaper album in 1968. Thus, he appeared very quickly on the stage of Maghreb cartoonists, and his first works appeared in particular in the official El Moudjahid newspaper. But he soon discovered that the repelling force is stronger than his ability to withstand, and here Rashid says:

“They were paying me five Algerian dinars for one drawing, which was not even the price of a carton.”

After seven years he left. and abroad he succeeded and magazines opened their doors for him, and he won numerous international awards such as: the Grand Prize at the Montreal International Fair in Canada in 1983, the El Kifan Tower in 1986, and the first prize at the Saint-Just Exhibition in France in 1988 – 1990. The interesting thing is that the first prize It was an impressive limousine cow weighing 600 kg. Finally, he received his honorary award from his home country at the Sixth Algiers International Caricature Festival (Fibda) October 2013, from there the idea for a beautiful album that relives every journey of Rasheed Qaci was born, largely illustrated with his best paintings. Published by Damen Publishing, the book is signed by Salim Koudil, who dedicates this book “primarily to the Algerian people, young and old, to let them know this atypical character with an incredible profession

Very quickly, Qaci imposed not only his style, but especially his hard-line view of the Arab and Islamic world. A pioneer, he modernized photojournalism and caricature, introducing new techniques and new use of colour. He moved to Paris in 1973 and worked as a journalistic cartoonist for about fifteen years, exclusively for the young Africa magazine Jeune Afrique. His talent as a freelance journalist then continued to be expressed in a plethora of headlines such as Courrier International, Nouvel Economiste, Libération, Sciences et Vie, En-Nahar, L’Histoire and many other international publications such as Nous Deux and Play Boy. Not to mention his collaborations with corporate and association magazines such as SNCF, Accor, FO and Suez.

He worked for international institutions such as UNESCO and the World Health Organization for their publications or campaigns. He was a talented designer. He also created posters for cinema and theatre.

Disappointed, in Paris and Algiers, he travels to New York where he had his work published in the New York Times, but always seeks or seeks an overlooked divorcee, who has lived in exile for more than ten years in Santo Domingo

And because he was one of those who carried with them the concerns of the homeland in their departure, a 32-page book (Let the Veils Fall) was published in 1984 (Paris) on women’s freedom. This book was banned in all Arab countries, but it won a large number of international awards and was reprinted twice and sold 30,000 copies. Included in this book are drawings that appear to be caricatures, but are taken from the core of Algerian daily life

In addition to foreign newspapers and magazines, he also worked in 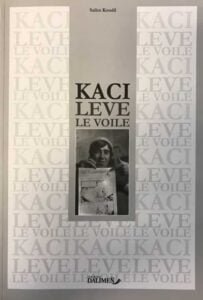 He was the person his friends called “the wandering Arab” or, as the Egyptian poet Ali Mahmoud Taha called him, “the wandering Sailor” (but he liked to call himself “rebel art”), an artist in essence, who made his life a permanent exile.

After suffering from chronic kidney failure, he died at the age of 74 on May 22, 2016 in Paris and was buried away from his country in the Muslim Square in the Thiais Cemetery, south of Paris.